If Jesus rose from the dead…
does that make him a zombie?

That’s the question of the week. Here are a few Jesus=Zombie sightings to help you decide.

First, a sock knitting pattern named for Jesus the Zombie. When I first saw a zombie sock pattern in the atheist and agnostic crafters forum on Ravelry, I couldn’t imagine what zombies had to do with anything. Then I read the description. (A side note to knitters and crocheters, if you’re not on Ravelry you are missing the premier opportunity to indulge your internet addiction and your crafting habit at the same time. It’s still in beta so there’s a waiting list to sign up, but it goes quickly and you won’t regret signing up.) 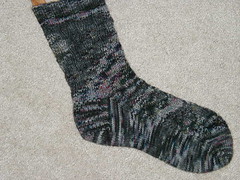 This pattern was inspired by Lime & Violet Podcast #50. One of Ms. Limeâ€™s friends has a 9 year old son who concluded that Jesus was a Zombie because he rose from the dead.Â

Second, here’s a cartoon by Jessica Hagy at Indexed. The connection between Jesus and zombies is a bit more tenuous.

And, holy crap, there’s even a movie!

Once you know about the connection, it’s easy to see how Easter can become Zombie Jesus Day.

And I’ll close with this entry from the Futurama Encyclopedia:

Jesus: In the 31st century, the word “Jesus” has become a standard exclamation of amazement, usually used by old people. Examples include, “Holy Zombie Jesus!” and “Sweet Zombie Jesus!” Due to the Zombie content, it is fair to assume that Jesus was not at his physical prime during his second coming.

I hope all this gives you pause for thought, or at least a few chuckles for your Sunday morning. I can’t believe I never made the connection before. Am I the only one who has never heard of Zombie Jesus?

Oh, and Happy Mother’s day to the moms amongst our readers!

Â P.S.Â There are two other skeptical angles I want to take with zombies in the future, so expect to see them coming back in this series soon!