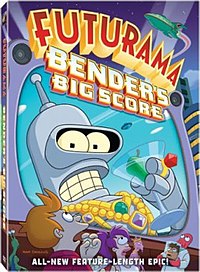 Futurama is always the best when it comes to getting in digs at pseudoscience while making viciously nerdy jokes. In the new movie Bender’s Big Score, not only do you get 90 minutes of awesome, but also extras like a fun math lecture titled “Bite My Shiny Metal X” and a full-length episode of Everybody Loves Hypnotoad, which includes a funny spoof on the homeopathic nonsense “Head-On.”

Of course, the movie version of a beloved TV show rarely lives up to the original. Bender’s Big Score does a fair job of it, but it’s not as full of awesome as, say, my three favorite episodes might be all strung together. (I know you’re wondering, so I’ll tell you: Hell is Other Robots [Robot Devil is my favorite character EVER), Luck of the Fry-ish [made me cry], and Three Hundred Big Ones [also made me cry from laughing so hard at the very end when Fry drinks his last cup of coffee].)

So, I’ll give Bender’s Big Score the following official ratings:

SKEPTICAL RATING: 5 out of 5

Of course, you shouldn’t just buy Bender’s Big Score. You should go out and buy every season of Futurama on DVD, because it was one of the greatest television shows of our time. This is indisputable. They know their audience is made up of a bunch of smart geeks, and accordingly they take every opportunity to work in real science while eviscerating crap pseudoscience like homeopathy and astrology. Plus, it has the greatest theme song ever, and PLUS, Matt Groening is my hero. Therefore, I give Futurama the following official ratings:

SKEPTICAL RATING: 5 out of 5

The remainder of the review will be random quotes from Bender’s Big Score. In the comments, please add your own favorite skeptical quotes from Futurama, and tell me what your favorite episodes are!

Professor Farnsworth: I’m sciencing as fast as I can!

Al Gore: Finally, I get to save the Earth with deadly laser blasts instead of deadly slide shows!

Professor Farnsworth: I can wire anything directly into anything! I am the Professor!