As much as that sounds like a euphemism, it isn’t.

Remember the crazy guy who claims he has specially bred giant Japanese crab lice that don’t bite? And that they make great pets? (Like Sea Monkeys in Your Pants!)

So, when I wrote about that, and how utterly full of shit that website is, I got an email from a reporter. The LoveBugz.net website offers to send you your very own “pets” if you send them your address and a buck. The reporter wanted to buy some lice and have me look at them.

I thought the site was just a creative ad-farm scheme, so said “Sure! Send ’em to me!”
Because, seriously.
It had to be a a scam. Who is going to go to the Better Business Bureau and complain that they didn’t get the pubic lice they paid for?

Just in case, though, I gave him my home address, rather than my

work address, since I have only been in my new job 7 months and wasn’t sure what might show up in the mailroom.

And then: An envelope DID show up. (Sealed with duct tape, too!)

It appears to have a postal mark from Teterboro, NJ. And scrawled across the front: “Live Insects! Handle with Care!”

Inside was a folded letter, and inside the letter was this:

I think most of you are having the same reaction I did: EW.

The letter that came with it had instructions: 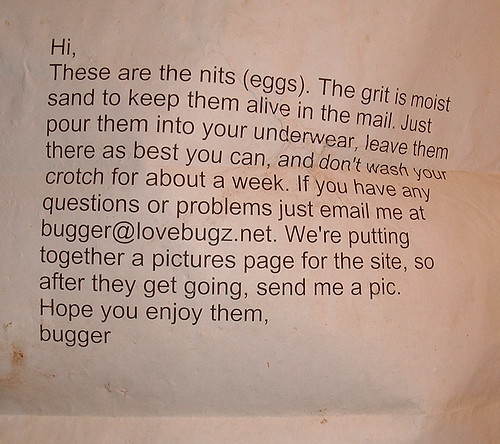 I think I can safely speak for the vast majority of the readers of this blog when I say “Oh, HELL no!”

I’ll wait while the mass collective shuddering dies down.

So I put the “specimen” in a sealed tupperware container with a moist towel, set it on my plant warming pad (since lice are triggered to emerge by moisture and heat), and took them to work with me the next day. Where 2 graduate students were fascinated, and 1 was pretty much traumatized by the whole concept and probably tried to autoclave herself after I left the lab.

[Also, a tip: if you walk into your new workplace brandishing a container of putative pubic lice and sand, you may want to provide a more detailed back story than “I bought them on the internet.” Just some advice.]

Anyway, we looked carefully under the scope, and aside from documenting that Mr. LoveBugz is (a) brunette; and (b) has pubic hair that is very smooth and well conditioned; we found no nits or lice.

There was sand; and there was some stuff that looked like seed capsules; 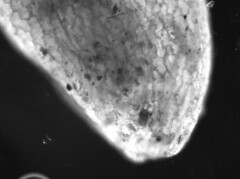 but unless lice have developed egg capsules that look remarkably like they have cell walls, there were no nits, dead or alive.

Hereâ€™s the closest thing to a nit I found (additional photos here and here.) Nothing that I have read in any taxonomic descriptions so far mentions this kind of pattern.

While plant cells have cell walls, no animal cells do. Ergo: This ainâ€™t an animal.
Everything I picked out of that sample turned out to look very similarâ€“plant material, not animal.

There are regrettably few photos of crab lice nits available online, although plenty exist for head lice. You can see some sculpturing of the outer egg case in this photo, but nothing likeâ€¦well, cell walls. You donâ€™t see it in this electron micrograph, either.

There was a hole in the envelope, so it is entirely possible that the nits that were promised fell out of the envelope in transit. However, why in the world would you not send them in a sealed container of some kind? Even a paper towel in an unsealed Baggieâ„¢ would have worked.

And why mail them in sand? Sand is abrasive, and likely to crush anything else during transit in surface mail. Sending the lice packed in sand, and telling the recipient to put sand in their undies and not wash for a week?
Yeah, thatâ€™ll happen.

Conclusion: The Site is Still Bullshit.
But they are willing to go a long way to keep up their hoax and/or delusion.

[cross-posted from the Bug Blog]