Last night’s shindig at the Cambridge Brewing Company was great, with maybe 20 people showing up. Expatria worried that the Pharyngula crowd would be too cliquish for lurkers, but happily I think we all got along beautifully. Best skeptical moment: Joshua noticed that one beer on the menu, called Om, had an interesting description:

A new venture into the world of beer and mystical experience. contemporary theories of sound therapy were incorporated into a process which aligned this Belgian-style golden ale to the specific frequency expressed in meditation circles by the mantra “OM.” Subtle expressions of Brettanomyces complement the beer’s dry but malty palate with flavors and aromas of pineapple and peach fruit, creating a harmonious balance of honeyed malt and hop yeast and flora, and oak character, with a final stated goal of assisting humanity in its quest towards inner bliss, equanimity, and world harmony. Oh, and it’s delicious.

So of course I had to get a tower of the stuff, which I then tried to force on everyone else at the bar, whether they were with us or not. “Drink it!” “Is it good?” “It’s harmonious!” 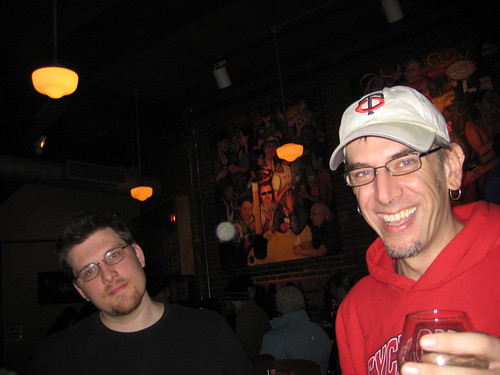 Jeff was kind enough to wear fire engine red so we knew how to find each other. 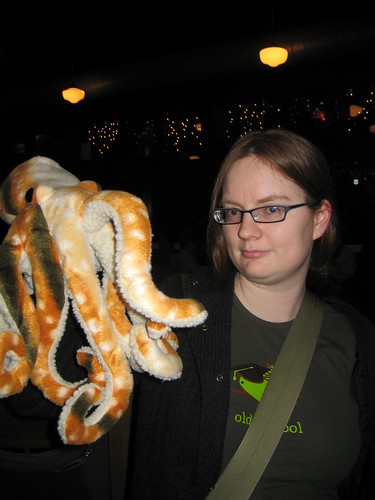 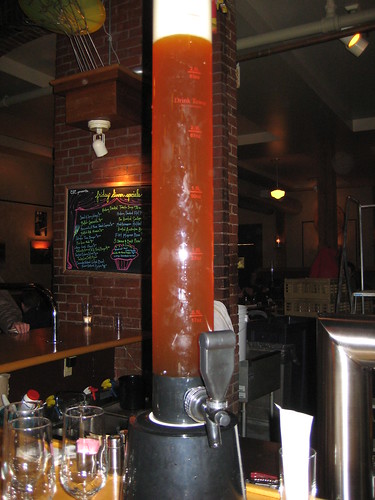 The Tower of Om. It was…fruitier than I expected. And by the way, the beer just above Om on the menu was Weekapaug Gruit (ABV: 6%), which “incorporates the traditional brewing herbs sweet gale, yarrow, and wild rosemary, along with licorice root and nettles….has a pleasant, herbal tea-like aroma and flavor.” The real laugh was in the note at the bottom: “Note: Pregnant or breastfeeding women should consider avoiding consumption of this beer due to the mild medicinal nature of the herbs used in crafting this beer. Please consult Hygicia, A Woman’s Herbal by Jeannine Paravali or Stephen Harrod Buhner’s excellent book, Sacred and Herbal Healing Beers.” As Joshua pointed out, it’s not all the alcohol pregger women should worry about. It’s those damned herbs! 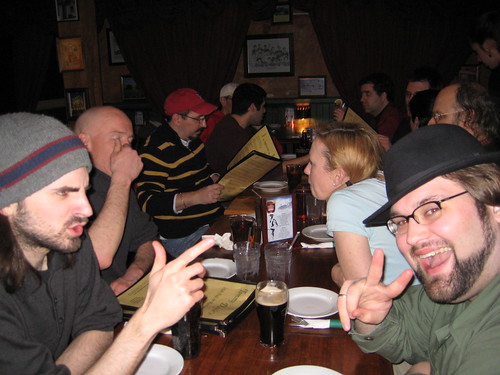 After we wore out our welcome at CBC, some of us moved next door to Tommy Doyle’s. At some point I got on my soapbox about the lack of women in skepticism. Around 11pm or so, Jeff and I shared a pleasant T ride back toward Allston/Brighton. When I stepped off the train, the snow was already coming down, and still is as I type. Sigh. Only two more months of this. Here’s to more fun meet-ups with smart people to make the winter fly by!