I think it might be because Judaism is not about belief. You wouldn’t hear this, for example, in a church or a mosque: 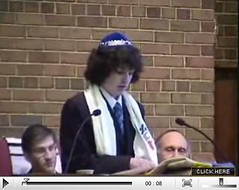 Even in Israel, where Jews are often accused of being fundamentalists, and where orthodoxy arguably does have a stronghold (the differences between orthodoxy and fundamentalism in all religions requiring a completely separate discussion…) belief in God is optional. You can, with a straight face, call someone a secular Jew or even an atheist Jew, and they won’t even be insulted. Who among you has ever heard of a secular Christian or an atheist Muslim?

The ambivalence about Judaism in Israel became clear to me one night as I sat drinking in an alleyway bar in Tel Aviv with my Israeli friend Omer. Omer has been studying abroad in Germany for the past few years, and admitted that he felt disconnected there, and had started attending a Friday night dinner with other Jewish students. â€œMy father would disown me if he knew I was lighting Shabbat candles,â€ said Omer guiltily. â€œWe come from a long line of staunch Tel Aviv atheists.â€

In order to counteract this deep rooted aversion to religion, the Jewish Renewal movement (different from the 1960s American movement of the same name) takes a more flexible approach, focusing on ritual, tradition and spirituality rather than outright faith. While the term â€œsecular synagogueâ€ may seem like an oxymoron,to proponents of Jewish Renewal, itâ€™s the basis of their ideology.

When reading Shalom Auslander’s Foreskin’s Lament, the author’s story about growing up in an abusive home and a suffocating Orthodox community, I just didn’t find the bile rising to my throat the way I do when I read Infidel or any of the plethora of Christian de-conversion memoirs I’ve read over the past couple of years.

I can’t believe I haven’t made Foreskin’s Lament one of our reading selections! I guess it’s because I’m trying to cover a range of topics and not inundate you solely with my own preoccupations. But this book is definitely in the must read category. Jewish writers, for some reason, can make these things funny, while Christians and Muslims seem to think that humor is a sin.

“If you read this while you’re eating, the food will come out your nose. Foreskin’s Lament is a filthy and slightly troubling dialogue with God, the big, old, physically abusive ultra orthodox God who brought His Chosen People out of Egypt to torture them with non-kosher Slim Jims. I loved this book and will never again look at the isolated religious nutjobs on the fringe of American society with anything less than love and understanding.”

On the other hand, Jewish fundamentalists are stupid control freaks, just like fundies of other religions:

Abe Karpen, 25, a married father of three, was cast as [Natalie] Portman’s husband in “New York I Love You,” a film composed of 12 short stories about love in the five boroughs.

“I am backing out of the movie,” said Karpen, a kitchen cabinet salesman. “It’s not acceptable in my community. It’s a lot of pressure I am getting. They [the rabbis] didn’t like the idea of a Hasidic guy playing in Hollywood.

“I have my kids in religious schools and the rabbi called me over yesterday and said in order for me to keep my kids in the school I have to do what they tell me and back out,” Karpen said.

Well, those are a few of my subjective and highly personal thoughts on the matter. Discuss.