In lieu of Easter, I would like to invite you to join me in celebrating Blog Against Theocracy Weekend! 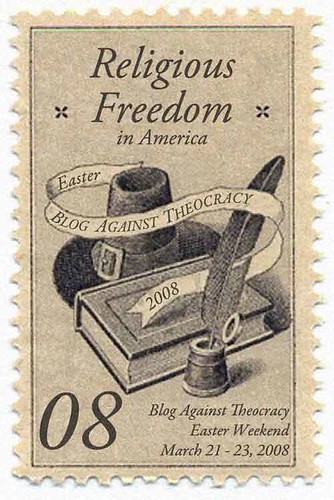 With all of the talk about religion in the current presidential race in the United States,
I’d like to say that I do not think religion belongs in the public debate or the public sphere at all. Just like our sexual activities, our religious activities should be private. I find it embarrassing that these things are brought into the discussion about political candidates. In the election process, we are essentially interviewing someone for a job. If I were hiring someone at the company where I work and I asked them about their sex life or their religious views, I would be fired. And rightly so. Hiring a marketing manager or a computer programmer is no different — should be no different — than hiring a president. We should be looking for the person with the best understanding of the job requirements, and the best qualifications for the job, including education and experience. Period. That’s it.

Unfortunately, most Americans seem to think that the candidates’ sexual lives, and perhaps even more importantly, their religious beliefs should be part of the national dialog. Since this is the case, I think we should grill the candidates as much as religious followers do. With that in mind, I’d like to point out this post at First Freedom First, “Questions to ask the Candidates.”Here are my favorite three questions from the list, although it was hard to pick just three:

Do you think my pharmacist should be allowed to deny me doctor-prescribed medications based on his or her religious beliefs?

Will you respect the rights of those in our diverse communities of faith who deem same-gender marriage to be consistent with their religious creed?

Should â€œfaith-basedâ€ charities that receive public funds be allowed to discriminate against employees or applicants based on religious beliefs?

Even some believers want to ask the candidates more pressing questions, not content for them to simply wave the flag of faith. If candidates are claiming religious piety in order to garner the votes of the faithful, they should have to validate their claims and show how their faith would inform their policies. Here are some questions that Randall Balmer, evangelical Christian an author of the book God in the White House: A History: How Faith Shaped the Presidency from John F. Kennedy to George W. Bush thinks Bush should have had to answer:

Mr. Bush, Jesus demands in the Sermon on the Mount that his followers ‘turn the other cheek’? How will that teaching guide your conduct of American foreign policy, especially in the event of, say, an attack on the United States?

Jesus, your favorite philosopher, says that we should care for ‘the least of these.’ How does that inform your understanding of welfare or Social Security or civil rights or the graduated income tax?

Mr. President, Jesus expressed concern for the well-being of the tiniest sparrow. Do you see any relationship between that sentiment and your administration’s environmental policies?

Mr. President, Jesus, the man you invoked on the campaign trail as your favorite philosopher, invited his followers to love their enemies. How does that teaching square with the invasion of Iraq or with your administration’s policies on torture?

Balmer is a supporter of separation of church and state, although he does not believe, as I do, that religion has no place in the election process. He does, however, believe — as did most of the churches I attended as a child — that the combination of religion and politics is dangerous and a recipe for disaster:

Nearly four centuries ago, Roger Williams recognized the dangers to the faith of too close an association with the state. He worried that the “garden of the church” would be sullied by the “wilderness of the world” if not for a “wall of separation” between the two. Neither Williams nor the founders proposed to bracket an individual’s faith from political considerations, but they discerned the dangers of conflating the two.

I agree with Balmer that if we are going to have this discussion, we need to make the candidates answer serious questions about the policies they intend to enact and their beliefs about the Constitution and the freedoms and rights of American citizens. If their religious beliefs will cause them to fail to preserve, protect, and defend the Constitution — the only thing they swear to do upon inauguration — then they do not deserve our votes.