Hi all, I’m here in Ft. “Home of the JREF” Lauderdale for TAM 5.5! Not to make you all jealous or anything. Thanks to free wi-fi here at the hotel, I’m able to get up before the sun in order to buzz through 80 e-mails and give a little bloggy update.

I arrived just about on time, around 3pm. Jeff Wagg met me with a mutual friend Brian, but before we could drive to the hotel more skeptics poured into the airport, including Robert “Stop Sylvia” Lancaster and his lovely wife. Hm, that nickname is actually a little cruel only because it includes reference to that horrible ass-beast. Anyway, eventually we got back to the hotel, where I met up with my old friend and new Skepchick-blogger Sam. Sam and I went on an adventure through the streets of Ft. Lauderdale in search of a surf shop — we found it, and it was right next to a tiki bar that served delicious frozen concoctions full of alcohol. Sweet. (Literally.)

We got back to the hotel and met up with a big group of skeptics at the hotel bar, which appears as though it was boarded up in the 1970s and only recently reopened with no attempt at any kind of renovation. Why is that, you ask? Because apparently, that is exactly what happened. I am not joking. There’s a mirror ball hanging down, the tables wobble enough to be untrustworthy to hold drinks, there are movie posters from the ’70s on the walls, and a neon sign that says “disco.” There was a film canister art piece nailed to the wall behind us. Lava lamps were on a shelf but not plugged in. The bartender got a bit snippy when he informed me that they “don’t have any Irish whiskeys,” let alone the simple Bushmill’s I requested.

We had a drink and then left to go find food. We didn’t have to go far, as an Indian place is attached to the hotel. Happily, we ran into Randi just before we went in, so he joined us. I remembered to snap a few pics. 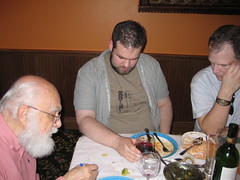 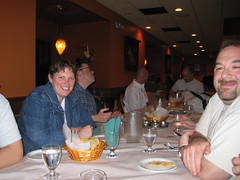 I had been dying to try out the pool since we arrived. It’s in an outdoor courtyard surrounded by the hotel rooms. So, immediately after dinner I changed into my suit and dove in, convincing only four others to follow while the rest of the gang relaxed and talked. Hooray for 70-degree weather in January! I’m already starting to take back all the nasty things I ever said about Florida. Well, some of the nasty things.