Where to start? I’m back from the Amazing Adventure 2 in Alaska, and I’m beat. I had an absolute blast hanging out with old friends and meeting some pretty wonderful new ones, with a dash of skepticism thrown in for fun.

Since I last posted, on Friday our merry crew of skeptics stopped at Icy Strait Point, a totally made-up “destination” with a very pretty beach and wooded path but more importantly “up to 13 retail locations!” Friday night we had a formal dress night, and I have to say that skeptics (and most other people for that matter) look damned sexy all dolled up.

Then on Saturday we had a nice long day at sea, during which time we actually saw some sunshine, plus orcas and porpoises as we sailed past Vancouver Island. Saturday was also the day I gave my talk, all about the weird and paranormal things we’d seen on our Alaskan vacation. I think the highlight was my artfully rendered drawing of Hal Bidlack.

Saturday night I ran a fun game in which people had to match JREF cruisers to their particular strange facts. You people are very weird. Spending time in a Spanish jail? Appearing on TV as Phantom of the Opera? Good times!

Sunday was disembarking, which took forever but at least I spent the time with Randi and a bunch of other skeptics. Once off the boat, five of us piled into a stretch limo to go to a little post-cruise party for a few hours before I had to catch my red-eye out of Vancouver. The flight was awful awful awful, but we don’t need to go there. It was a really wonderful, awe-inspiring trip to Alaska overall, and so good that it couldn’t even be ruined by a screaming baby and a middle seat on a packed jet for six hours.
I’m uploading some photos to Flickr right now, since it’s a pretty mindless thing I can do while attempting to regain control of my faculties. Hopefully I’ll get all my favorites uploaded today. Here are some showing each of the speakers: 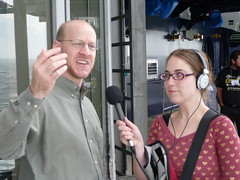 I’m asking Phil Plait about a rainbow we’re watching off the port side. 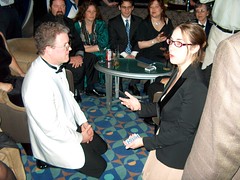 I told Jeff Wagg at the outset, “I’m not doing magic on Magic Night.” He agreed but gave puppy dog eyes because he needed more magical things to happen. I had another martini and finally grabbed the deck. To get back at Jeff, my first bit was a sucker trick performed on him, which got him hook line and sinker. The highlight of my week: Randi laughing and saying he’d have to add that one to his repertoire. 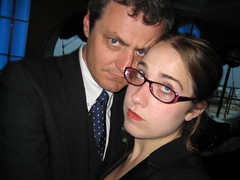 I’m sure I have no less than 30 photos of Richard Saunders and I mugging for the camera. Most poses were either the traditional Skepchick pose (above, right), the traditional Aussie stare (above, left), or “wistful.” 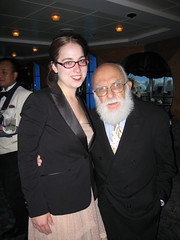 Randi and I on our last formal night. Aww. I got a ton of quality Randi time in on this trip, having breakfast with him every day and hearing a ton of trademarked Amazing Randi Stories. 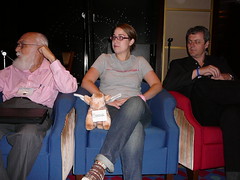 Here we are during one of the panel discussions, which went very well I think. It was a relatively small crowd compared to TAM, so it allowed a bit more interaction with the audience than usual. 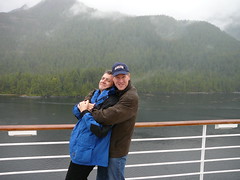 I can’t find a photo of Hal and me, so here’s one of him and Richard snuggling on the deck. Aww!

Oh, and there were also some glaciers and whatnot.