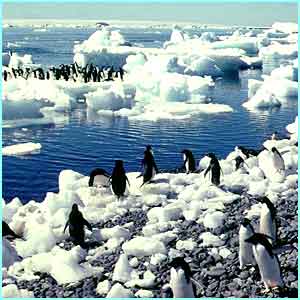 The penguins are celebrating. IPY has begun!

Everybody celebrate! The International Polar Year had begun! Through March 2009 (wait a second: isn’t that two polar years? Oh, well… who said Earth Scientists could do math?) Earth Scientists from all over the world will concentrate their efforts on understanding Earth’s polar regions. There will be all kinds of special expeditions, meetings, and collaborative studies focused on better understanding the poles. The start of the IPY is particularly poignant this time round because of the increased focus on and concern about climate change. The poles are very sensitive thermometers for rising global temperatures and are affected much more by climate change than the more temperate equitorial regions.

Personally, I hope this means that there’s a trip to Antarctica in my future… hey, there’s a volcano there.