Immediately following the conclusion of the day’s speakers, I met up with a friend (Exarch, who comments often here on the blog) and hustled across the street to the Hilton Hotel. Of course, “across the street” in Las Vegas means a long trek through expansive parking lots and casino floors and an eight-lane highway, but twenty minutes later we were walking into our destination bar: Quark’s. The Hilton is home to the nerdiest production in all of Vegas: the Star Trek Experience. Quark’s Bar is based on a venue of the same name in one of the shows, and according to the nerds in attendance, it’s a good reproduction. 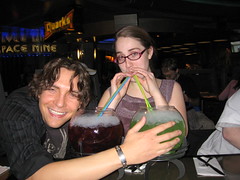 We were there to meet up with Steve, Jay, Bob, and Evan from the Skeptics’ Guide, as well as a bunch of our listeners. It was a very good turnout and we had a lot of fun laughing about the nerdy food and drinks, like (I swear to god) the “Sulu Toss” Salad and the “Warp Core Breach” Jay and I split. The WCB was a giant fishbowl filled with alcohol and dry ice so it poured smoke everywhere. It tasted like candy. Here’s a pic of me drinking the WCB at the same time as its cousin, the Borg Sphere. Jay is fondling my bowls.

We had dinner at Quark’s and I have to admit, it was actually pretty damned tasty. Jay and I split the pepper-encrusted tuna and they actually cooked the thing properly. Or, maybe they just ordered it from the holodeck or whatever nerdy thing they do. Whatever, it was tasty.

I got back to the Riv with the guys, and we all sat down to play some blackjack, extending our together time a bit. We all played pretty well, and I was up about $60 after an hour or so. Soon I left them all at the table, since I was feeling pretty rushed because there was a lot going on. I knew the Pajama Party was underway in the room of the fabulous “Girl 6”, but I couldn’t remember which room number because I’m an idiot. Let me briefly explain something about the Riv: there are three or four towers of rooms, all numbered in a continuous stream. For instance, the “Monte Carlo” tower would have rooms 2501-6000, and then room 6001 would be two miles away on the second floor of the “Monaco” tower. Every time I tried to go somewhere, I got in the wrong elevator. It was like one of those dreams where you think you know where you’re going and every time you turn around there’s another endless hallway.

Anyway, I walked over to the conference room to see if I could find any PJ Partiers. I found Jeff Wagg, who had a webcam set up on a laptop — it was streaming right onto the web, one picture every minute. He showed me how I could disconnect just the screen of the laptop and carry it around with the camera attached, continuing to take photos and upload them so long as the computer could find a wireless connection anywhere in the hotel. Awesome.

I set off in search of the PJ Party, and eventually I thought I knew the general area. When the elevator doors opened, though, two male friends stepped in, told me they were taking me to another party, and back down we went. We ended up at another friend’s room, where the Whiskey Party was in full swing. This was originally (back at TAM2 or 3) a quiet gathering designed to provide the male balance to the Pajama Party, but clearly it had reached a new level of popularity, because the place was hopping. Someone handed me a glass of whiskey as they took the webcam and set it up by the window. It was up for about 10 seconds before pants started coming down. “That’s going live onto the Internet,” I pointed out. A cheer went up. I downed the whiskey.

Sometime after the above photo was snapped, my brain ceased bothering to record memories of what was going on. Just now, I hopped on over to my TAM roommate’s blog to see what I did:

And so the party raged until about 3:30 or 4am. Ed and Simon seemed okay if everyone stayed, but folks began to filter out anyway. The casino bar awaited the diehards, and that’s where we headed next. I often wonder how much whiskey a man can drink in one night, and I’m proud to say that I participated in some practical research that night. I have no idea what time I finally made it to my room, or if Rebecca was with me when I did, but somehow I woke up at 8:30, and threw my body into the shower to prepare for the conference.

Thanks for nothing, Sam. I think I made it to the bar. Apparently I made it back to the hotel room, since I definitely did wake up there Saturday morning in time for that day’s presentations.