Finally, the conference began! Sam and I were proud that we got in early (that is, before 2am) last night, so we actually made it to the breakfast before the talks began. For breakfast, one could choose from a variety of different types of sugar: sliced fruit, cheese danishes, apple danishes, croissants, orange juice, or apple juice. It was incredibly bad and unhealthy, but it made me laugh a lot, which is tough to do at 8am. I thought of last year at the Stardust — the number one complaint I heard was, “Please, give us healthier options for breakfast next year!” Back then I just laughed at the silly people who didn’t realize that breakfast is just an excuse to eat dessert for a meal, so I was secretly delighted that it was even worse this year.

It was time for the speakers! First up was perennial favorite Michael Shermer, who spoke about bottom up economic evolution and organization, the topic of his next book. His talk was interesting, but it was very early in the morning to be reading long text on PowerPoint slides. That’s a pet peeve of mine when it comes to presentations, and as another skepchick put it: “I can read faster than you can talk. Stop it.” Also, following his talk I turned to Sam and said, “I am so effing sick of Libertarians.” Not that there aren’t plenty of good points to be made in favor of more political freedom, it’s just that I’m getting mighty tired of not-at-all-skeptical political ideology slowly and quietly infecting the skeptical community. Michael’s talk didn’t focus on Libertarianism per se, but it was there, lurking under the surface. Like herpes. 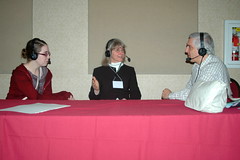 Next up was Eugenie Scott, who absolutely killed. I mean, I can’t say enough good things about her. Riffing on the general sickness of wordy slides, she actually stopped at one point to specifically instruct the audience to stop trying to read the articles she was showing as examples. Genie is exactly what I strive to be — smart, funny, motivated, passionate, kind, and gorgeous. She spoke about how her team used the media to win the Dover intelligent design court case, a fascinating look at what was going on behind the transcripts. She had another conference to go to immediately after her talk, but we managed to get her to sit down for a little while to do the Skeptics’ Guide to the Universe podcast. I won’t give away what we discussed, but she’s looking forward to some exciting ventures coming up. (Post-publishing edit: download Genie Scott’s interview with SGU here!) 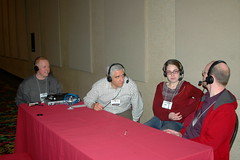 Lunch was fantastic. Not because of the food (sammiches), but the company. I sat with my fellow podcasters so we could eat and then record. It was so fantastic recording all together — normally we are each in a separate city conferencing online, but for once we could actually see each other and our guests, allowing for much easier communication. During lunch, we recorded my friends Phil Plait, Michael Shermer, and Richard Wiseman, all of whom were incredibly entertaining. I have to say that despite my slight criticism of his presentation, Michael is really enjoyable in a discussion or interview. Phil and Richard, as usual, made me laugh a lot and may have had something to say while they were at it.

The really great thing that set this year apart was the theme: Skepticism and the Media. Not only was it a great theme, but people stuck to it. Again and again in our interviews, the speakers kept coming back to that theme, giving their expert opinions on how the media perceive us as skeptics, how we can better take advantage of the media, and what the shortcomings are of our biggest media outlets. As a writer in marketing, I am very interested in all this and I think it does some real good to examine these topics in order to refine our message and our goals. 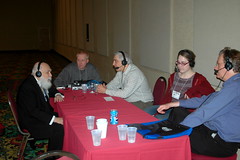 After lunch, Nick Gellespie from MIT spoke. I missed it. I believe that’s about when I ran into the always amusing Todd Robbins. Todd was at TAM4 and I may have met him, but I know I didn’t get enough time in his presence. I love the carnival, and few people know more about that culture than Todd, who is now the executive director of Coney Island, USA. He’s full of stories, talents, and weird weird tricks. I mean, the dude will unscrew a lightbulb to have a quick snack in the middle of a conversation.

So I grabbed Todd and took him back to where we were recording. Steve (Novella) was out, so we started recording anyway because I just really wanted to chat with him. After we had talked for a little while, Steve came back to the table with Randi, star of the show. Randi and Steve sat down and we all had a really great talk about the conference, the sideshow, the media, the Million Dollar Challenge, and anything else that happened to come up. It’s all on tape, and I can’t wait to hear it. (Edit: listen to the edited version of that interview here!)

Back up on stage, Randi was interviewed by the fantastic close-up magician Jamy Ian Swiss, who I kept trying to get on the podcast but our timing was just way off. Jamy and Randi showed clips from a Korean TV show, on which Randi appeared and helped crews investigate certain wacky claims. It was amusing and informative, though sadly the presentation suffered from poor (no) editing of the clips. 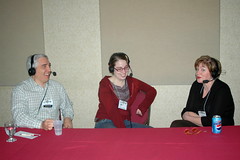 Lori Lipman Browne, lobbyist for atheists, was up next. I missed her talk due to the podcast again — I think this time we were talking with the always lovely Julia Sweeney. She’s very sweet, very funny, and she had just come back from appearing on Penn Jillette’s radio show with Christopher Hitchens, who she busted for his recent Vanity Fair article about “Why Women Aren’t Funny.” We talked for quite a while, and I always appreciate her refreshingly open and upbeat attitude. She gave TAM attendees a preview of her upcoming show, in which she delivers comic monologues interspersed with live music from Jill Sobule.

At the end of our interview, Jeff Wagg came to get us so that a reporter from the Las Vegas Review-Journal could speak with me and Julia about women in skepticism. That was a fun interview, and I really liked the journalist. I hope she’s kind to me in her article. (Edit: read that article here. Thanks, charwood!) 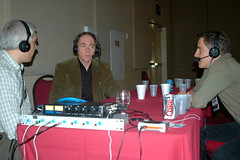 That interview took place during the on-stage Q & A with Penn & Teller (I think), so I missed that, too. Luckily, we got to chat with Teller on the podcast for a little while later on. He is very thoughtful and well-spoken, so it’s a real shame that we don’t often get to hear him over the bigger, louder half. Listen to Teller’s interview on this episode of SGU!

Next up on stage was Richard Wiseman. I can’t say anything really nice about him or else he’ll never let me hear the end of it, so I’ll just state the following facts (not opinions, nothing to do with me): he is always one of the top-rated speakers at TAM, the audience laughed all the way through his presentation (which included info on his World’s Funniest Joke contest and his scientific investigation of a supposedly psychic dog), he kept the audience entertained even through technical glitches beyond his control, and he has little to no hair.

That was it for the speakers. At a little before 6pm, we were released to go get important work done, like perhaps a presentation we may need to give in less than two days. Or party! Whichever.