Yesterday’s Riviera breakfast buffet sucked, but I couldn’t resist going back since the moment I stepped off the elevator I saw a group of skeptics headed that way. At least this time around I had the good sense to avoid the French toast and stick to the pumpkin pie. Yes, I ate pumpkin pie for breakfast. Sometimes I love Vegas.

I thought a bit about my video, asking just about everyone what they thought I should do. Some people suggested I try hitting up the guys milling in the lobby for the Daimler-Chrystler convention, and some others suggested I get my fellow skeptics to fake it. Another option was waiting until we went out bar hopping, catching people who were less than sober and thus more likely to be funny on camera. Since that option allowed me to not think about it for a few hours, I decided to go with it.

Thursday is the day of registration and the opening reception, so more and more people were flooding in. It was really a wonderful time for me, since I was stopped constantly by old friends I hadn’t seen in a year or more as well as by people who wanted to introduce themselves as fans of the blog or podcast. I will never, ever, ever get tired of meeting people who tell me how awesome I am. There were times during the week when I wanted nothing more than to crawl into a hollowed-out slot machine and die quietly, yet a little part of me still perked up whenever anyone said hello. 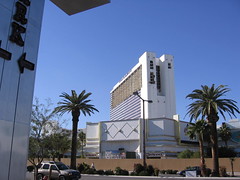 I joined a group of friends for a leisurely walk down the strip, eventually stopping to grab some beer. Along the way we passed the Stardust and saw crews pushing vast amounts of detritus out the open upper floors. Kind of depressing, really.

Three of my friends, including my roommate Jason, drove to Costco to pick up supplies for the party I was throwing Saturday night. Jason had the key to the room (I had lost mine the previous evening, because that’s the sort of thing I do). I had a small panic attack waiting for them to return, since I was thinking of all the things I needed to do: shower and change for the reception, check into the suite I had for the party Saturday, organize the music and refreshments for the party, and of course shoot the damned video for my presentation Sunday. I ran into Ray Hall, a friend from previous TAMs and the organizer of the Sunday presentations. I told him I’d have my presentation to him by Friday. Maybe Saturday morning at the latest. Sure, that might happen.

When at last my friends returned, I quickly changed into my favorite corset and boots and ran to the reception. This year, the reception was hosted at the Top of the Riv, a large ballroom located in the basement of the Tropicana. That was a joke, but I understand if you missed it since it wasn’t a very clever one. The ballroom had a beautiful view of Vegas out the floor-to-ceiling windows, but sadly I had no time to stand and appreciate it. As soon as I got there, I quickly took a photo with the other members of the Skeptics’ Guide to the Universe podcast, said hello to a few other friends, and took off back down to the casino floor, where I was supposed to be playing in a Skeptic’s Poker Tournament organized by AntiqueHunter, a member of the JREF forum. It was great of him to organize it, but I was really bummed by the timing since I wanted to hang out at the reception awhile.

Luckily, I got absolute crap for cards the entire game. I think I won a single pot by bluffing the snot out of everyone else when I got bored of just sitting there. So, when my inevitable loss arrived, I grabbed my things and ran back upstairs to the reception, which had about 15 minutes of life left. I got a chance to reconnect with a lot of old friends, like Phil “the Bad Astronomer” Plait (who had busted out of the tourney about 10 minutes before I did). He appeared to approve of the corset. 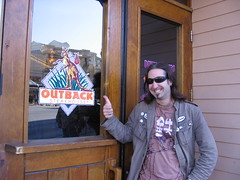 By this point, I had at least had a chance to exchange hugs with the majority of my friends I hadn’t seen in a while, like Phil, Jason, Randi, Richard Wiseman, Mike McRae who drew the original Skepchick cover, Skepchick blogger Tracy King, and a zillion others. Mike is shown here in front of his favorite restaurant, since he’s Australian. I was also especially excited to see one of my all-time best friends, Sam (of Rinderpest.com). Sam is like the . . . well, the Samantha to my Carrie. Wait, maybe those should be switched. Anyway, I was pretty damned happy to see him. He was my next (and final) roommate of the conference, continuing a tradition established at TAM3. 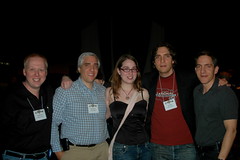 After hotel staff cleared us out of the Top of the Riv, a very large contingent retired to the bar downstairs, where we continued to drink and be merry. That’s when the Pub Crawl began, an activity made exceedingly difficult by Vegas casinos, which are each surrounded by seventeen acres of fountains and parking and cab stands. I fell in with the group (which included Skepchick blogger Evelyn) and we made our way to the Peppermill, a restaurant and lounge that has served as the default place for TAMsters to eat and drink each year. The lounge side was all reserved, so we left in search of the next place. I felt like utter crap, which I attributed to stress, so when the group decided to head to Treasure Island (home of the previous evening’s dueling pianos), I fell back and decided to just go to bed, even though it was only about 11:30pm. As I turned around, my phone rang — Phil Plait wanted to know where the party was. He wanted to eat, so we decided to meet at the Peppermill. Sam joined us, and soon we had a large group of our own. As we all sat down to eat, I realized I hadn’t eaten a single thing since the pumpkin pie breakfast, besides all the beer. I guess it wasn’t just the stress that was making me nauseated. So, as the worst cure ever for nausea, I got a giant plate of tuna melt and fries, while Sam and Phil split the largest bucket of nachos you will ever see in your life. That’s not hyperbole. It was stomach churning. I was going to take a photo but couldn’t fit it all in frame. That may have been hyperbole.

By the time we got back to the hotel, I was too exhausted and sick to even think of approaching people to shoot a video. Now I was really worried, and figured I would just need to rewrite the last half of my presentation. Sometime.