I have 1,282 new emails. I smell. My apartment smells worse. I have no food. I’m bitterly cold from the trip from the airport. I haven’t had a proper night of rest in a week. All this can mean only one thing: I’m a lazy slob. Also, the Amaz!ng Meeting 5 has come to an end.

For those of you living in a convent, the Amaz!ng Meeting is an annual conference focused on science and skepticism hosted by James “The Amazing” Randi. The actual conference stretched from Thursday until Sunday, but there’s always so much going on that I like to get there early and leave late. Here’s what went down. I have to do these in a few posts since I can’t stay focused long enough to do it all in one shot. Here we go!

This year, I arrived around 11PM Tuesday night. I caught a cab to the Riviera, an ancient (by Vegas standards) hotel casino at the far (lousy) end of the strip. We were within view of our hotel from TAM3 and TAM4, the Stardust, which was in the process of being stripped for parts.

Upon arriving at the Riv, I headed straight for the bar. I didn’t bother to check in, since I didn’t have a reservation — I just figured I’d be able to find a place to crash. At the bar, I immediately recognized several familiar faces from past years. There was much hugging, and then it was off to one of the hotel rooms to drink. And drink. And drink. Around 3AM (6AM my time), I staggered off to share a room with my good friend Jason, who I’ve known since TAM3.

For breakfast we ate at a buffet of course, because that’s what you do in Vegas. I had planned to get some work done that day, since I had to give a presentation on Sunday and a key component was missing — the video I promised to make for Blake Stacey. The concept was simple: I would stop people on the Strip and talk to them about astrology, using a classic exercise that points out the absurdity of horoscopes. I would end with a clip of Randi and me, with a clever little joke. I had a whole day to shoot and edit it, so I wasn’t worried. 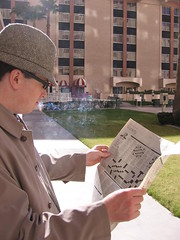 My buddy Simon is a wonderful photographer — he shot one of the Skepdude calendar photos and helped with many more — so he accompanied me to hold the camera. First we shot Randi, since he had more free time in the morning than he would the rest of the conference. That went fairly well (there were some sound problems but nothing major), so we headed out onto the Strip.

That’s when everything went to crap. People treated me like I had leprosy. Now, don’t get me wrong, I’m used to that (no, really — I’m not a leper but I’ve done my fair share of street canvassing). But, I severely underestimated the skeptical nature of the average Vegas tourist. No one talked to me, and eventually Simon and I grew tired of the rejection and went to see the Mapplethorpe exhibit at the Guggenheim instead. It was great, by the way — much better to see photos of others being humiliated rather than go through it yourself. As amazing as the exhibit was, I was beginning to get a little worried about what I was going to do for my presentation.

That evening I went to the Peppermill Lounge with some skeptical friends. Our group got larger and larger as the night went on since people generally go to the Peppermill when they’r’e not sure what else is happening. I met a ton of cool people there — particularly the British contingent. They already made up the majority of our group, when we got a huge new influx just before dinnertime (including Skepchick blogger Tracy and the ever amusing Richard Wiseman). I had dinner with about 16 skeptics, many of whom I had just met, and afterwards we decided to head out and see what kind of trouble we could get into. We tried the bar with mud wrestling, but there was a $10 cover so we moved on (I was in favor of staying but didn’t really mind since I tend to be very flexible [on second thought that may have helped me win the mud wrestling]). We ran across the street to the Wynn, where we were handed free passes to get into a HOT NEW CLUB (TM)! We stumbled around drunkenly before finding it at the far end of the casino, guarded by multiple large bouncers. Club music was beating inside, but when we walked in we found it completely vacant, not unlike the heads of the beautiful people I could see might spend time there. Figuring it was just a bit early (8:30 or 9 I think), we walked to the back and spread out on some comfy couches around a table.

In a few moments we were approached by our waitress, who looked like she was about two stalks of celery away from Ally McBeal. I don’t like to needlessly mock the tragically thin, but the girl was wearing a sparkly handkerchief for a dress and it hurt to look at her. Anyway, she handed us a drink menu and informed us that we could only buy drinks by the bottle, and if someone else came in and wanted to buy our table, we had to get up. We could order Red Bull to mix but had to pay for it by the can. We checked out the menu. I can’t recall the exact data, but I am not exaggerating when I write that they were happy to ask for something like $200 for an average bottle of Smirnoff. We all had a good laugh and then left for Treasure Island.

Treasure Island, despite its proximity, is the polar opposite of the Wynn. It is the UnWynn. Where the Wynn is high-priced, TI is proudly affordable. Where the Wynn courts the snobbishly trendy, TI markets to the average person. Where the Wynn strives for simple elegance, TI is shaped like a giant pirate ship. You get the idea.

We soon landed at a bar called Kahunaville. As we approached and the music within grew louder, someone said, “Ooh, good, they have karaoke!” Upon entering, we realized our grave mistake. The two men playing pianos on stage were not doing karaoke — they were actually being paid to destroy those Van Morrison songs.

I didn’t last long. Around 11pm I stood up and announced I could no longer bear the terrible, terrible, terrible men. My friends pointed out that we could all leave together as soon as a few people finished their drinks, but I was too tired and inebriated to not be a brat. Any longer and I probably would have stabbed someone (which was actually — disturbingly — a running joke throughout the conference), so I left. Back at the Riv, I went straight to the poker room and stayed for a few hours before collecting $60 in winnings and going back to the room. I had lost both my room key and the little slip of paper that said what number I was in, but luckily my roommate eventually found me, fed me booze for another hour or two, and then put me to bed. As I fell asleep I thought of the video I didn’t do and wondered what on earth I was going to talk about on Sunday.