I am back from a restful weekend. To compensate for my lack of sleep in Vegas and my busy lab schedule last week, I slept a wonderful ten hours on Saturday night and eight hours last night. I went to the rock climbing gym yesterday for a good workout, and I feel generally refreshed. Which means it’s back to the TAM 5 adventures…

After going to bed reasonably early Friday night, I was up early on Saturday. Well, sort of early. I allowed myself a leisurely shower and then breakfast with my dad and younger sister. I don’t see my sister very often any more, and I wanted to take some time to spend with her in particular. We ate a glamorous breakfast at the fine dining establishment McDonald’s. Hey, in Las Vegas even McDonald’s has flair. The McDonald’s near the Riviera has a flashing light display that rivals some of the smaller hotels along The Strip. Even the CVS pharmacy has flashing lights! I think the fancy lights made the Egg McMuffin taste a little better… just a little.

I finally made it to the conference just before ten. I caught the end of Scott Dikkers’s talk. The last ten minutes were hilarous, and I was sorry that I’d missed the rest of the talk. I didn’t regret spending some time with my sister, though. Next up was my friend Phil Plait, the Bad Astronomer. He gave a great talk about moon landing hoax theories. I particularly enjoyed his analysis of shadows. Apparently, one criticism of the authenticity of the moon photos is that the shadows in the photos fall in different directions. Critics have used this fact to suggest that the moon landing photos were staged and that the different shadows were created by Hollywood stage lights. Plait showed how this is not true. He demonstrated how shadows going in seemingly different directions are really just created by perspective. Shadows which are in reality parallel often appear to go in different directions or even converge, much like the railway tracks below, in photographs. 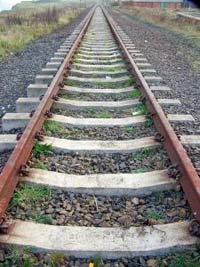 After Phil Plait was John Rennie, editor of Scientific American. He gave a great talk about how Scientific American has been combating pseudoscience for 150 years. He gave some historical examples and explained how the journal still combats pseudoscience, including the recent “Intelligent Design” pseudoscience. Remie talked about when he and the other editors at Scientific American wrote an article titled Okay, We Give Up, an editorial satire that brilliantly, in my opinion, expresses the frustration of scientists and scientific editors at having to combat such ridiculous pseudoscience. Read this article! It’s hilarious. Joking aside, though, this article highlights how we must combat pseudoscience. We cannot turn a blind eye to bad science, even when the science is so illogical it borders on the absurd. People believe the absurdity, ridiculous as it seems. That’s why people like Randi, John Rennie, Phil Plait, and Rebecca do such important work.

Next up was the infamous Christopher Hitchens. He was drunk enough (or hungover enough?) to give a brilliant speech. I often disagree with Hitchens, but I never disagree with the way in which he presents his arguments. Hitchens makes me think, and I like that. I laughed when I realized that the pen in Hitchen’s hand was not a cigarette as I thought. Last year, I believe (or it may have been TAM 3), Hitchens puffed on a cigarette through half his talk. I think it’s great. I think Hitchens should have a scotch in one hand and cigarette in the other at all times.

The next two speakers were Adam and Torrie, two of the Mythbusters. I missed some of their talk because I was again distracted by Jerry Andrus’s remarkable illusions. However, I caught the applause after Adam told the crowd something along the lines of, “I want Randi to use me. I want the JREF to use me. Use me, and I’ll be coming back next year and bringing as many mythbusters with me as I can.” I really admire Adam’s dedication to Randi and his cause, and Adam’s dedication speaks highly of Randi (and of Adam, too!).

Lastly, Penn interviewed Matt Stone and Trey Parker, the two guys who created the television show “South Park”. I enjoyed the interview, which was quite humorous at times. I was surprised that Matt and Trey do not consider themselves atheists and that they have a low opinion of Richard Dawkins, but when they more fully expressed their beliefs, I understood them better. I agree with them that parts of Dawkins’s latest book are poorly-written. The book felt rushed, at times. I have great respect for Trey and Matt and what they do on their show. I have decided that I need to watch more South Park. Since I don’t have television at home and have limited resources as a grad student, “South Park” DVD donations (legal or otherwise, I won’t ask) can be sent to Rebecca’s skepchick mailbox. I’ll go over and beat her up to obtain the DVDs, so send two copies if you don’t want us to fight.

After the speakers were over, I went out to dinner with my good friend Ray “Slick” Beiersdorfer. Slick is a professor of geology at Youngstown State University, and for the past three years we’ve been leading annual Red Rock Canyon excursions on the last day of The Amaz!ng Meeting. Slick took me out to a fantastic Chinese dinner (thanks, Slick!) so that we could plan out this year’s canyon tour. We ended up talking for a good two hours about various geological subjects. It’s a good thing no one else was at dinner with us because I think they would have soon tired of our excited chat about isotopes, petrology, and stratigraphy. As it was, the waitresses gave us strange looks when they overheard bits and pieces of our conversation. I had a good time at dinner, filling my belly and stretching my mind a bit. Slick is a great geologist– knowledgable, experienced, well-travelled, dedicated to science education, and– above all– creative. I’m proud to have him as a colleague.

After dinner with Slick, I went back to my room, showered, and put on my dress for the forum party. I had originally planned to wear a sparkly black dress, but I went for a more conservative silk blue dress with silver heels at the last moment. I already had enough skepdudes hitting on me, and I wanted to minimize my sex appeal. I wore some cool blue fiberoptic earrings with the dress, though, so I still had a touch of Vegas flair.

Rebecca has already posted some about the forum party, but it was a great time, overall. There was chocolate, beer, wine, and dancing. Best of all, there were dozens of fun, skeptical minded people. I didn’t have a chance to meet nearly enough of them. I can’t wait for next year’s forum party!

My friend TJ and I at the forum party.