I spent part of my Memorial Day weekend swimming in a beautiful lake with a friend in western Massachusetts. The upper eight inches of the water was like clear, warm bath water — below that was icy murkiness. It’s only natural, then, that the conversation turned to leeches.

I’ve never had the pleasure of encountering leeches in the Northeast — I’m more a connoisseur of ticks, myself. So I was surprised when my friend informed me that their bites don’t hurt at all, and you can just brush them off to remove them. Back home, I did a little leechy Googling and was even more surprised by what I found.

You may have heard the argument, “Well, they’ve been doing X for thousands of years, so it must work!” And you may have also heard the response, “They treated diseases with leeches for quite a while, too.” Unfortunately, my usual go-to snide reply may not have the full punch I prefer, now that I’ve discovered thatÃ‚ medical professionals areÃ‚ still using leeches to treat certain maladies, with impressive results.

In the past, doctors used leeches to treat just about anything, assuming that if something was wrong and they couldn’t pinpoint it, it must be “bad blood” that should be removed. This resulted in a lot of people losing a lot of very good blood. ButÃ‚ recently, doctors have effectively used leeches to increase blood flow in very specific spots, such as at the point of reattachment of a severed finger. The leech’s sucker releases an anticoagulant to keep blood flowing, plus an anesthetic so that it might suck undetected. These traits make the slimy little bastards perfectly precise instruments of science. 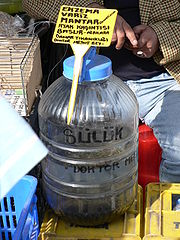 Now, a new clinical trial shows evidence that leeches can be used to treat arthritis. Two groups of women were tested — sixteen of themÃ‚ applied a painkilling ointment to their arthritis-ridden hands and sixteen applied leeches.Ã‚ This is what I’m imagining:

RESEARCHER: “Let’s see, Agnes, looks like you’re in Group One. Here’s your tube of ointment. Next! Hm, Helen, Helen . . . ah, here you are. Group Two. Here’s your jar of leeches. Oh cheer up, you act like you’ve never purposely exposed your skin to a slimy blood sucking parasite before.”

The group who used the leeches showed significant improvements in pain management in just a week, and the effects continued for a full month after the treatments stopped. It’sÃ‚ a reallyÃ‚ impressive result, though I’d be more impressed if they had been able to perform the test double-blinded. For instance, they could’ve exposed one group to leeches that don’t suck blood, like E.punctata, N.obscura, faith healers, or your brother-in-law.

Apparently, each medicinal leech is only used once before being disposed of. Personally, I was a little saddened to learn of this. There is a concern with spreading disease, though there appears to be little evidence that such a concern is justified. While searching for more information, I checked the PETA web site to find out what they were doing about this injustice. Oddly enough, I couldn’t find a single mention of medicinal leeches on their web site. Where is the outrage? Where is the anger? Where is theÃ‚ billboard ofÃ‚ Pam Anderson standing naked in a swamp, covered only in leeches?

I suppose that until the leeches get some serious public relations representation, they’re on their own.