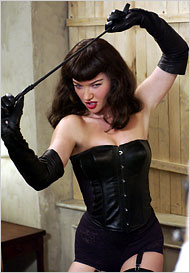 Coming soon to a theater near you: Bettie Page. She’s the sexy S&M pin-up girl of the ’50s who has found a new audience in present-day hipsters the world over, appearing on t-shirts, buttons, magnets, and even lunchboxes. Now she has a new movie all about her life, starring Gretchen Mol.

This is sure to inspire a whole new rehashing of the ever popular pornography/women’s rights debate. Is it insulting or empowering? Beneficial orÃ‚Â dangerous? As a woman, should I be critical of this objectification?

Here’s a recentÃ‚Â article about the issue: Activists Lament Porn’s Move to Mainstream.

Imagine that — a psychologist and addiction expert says that many of her patients suffer sexual dysfunction. No kidding? I just conducted a study concluding that cold temperatures cause abnormal levels of aggression in adult males. My sample? The starting line-up of the 1974 Flyers.

“With little or no effort, as long as you have a computer, you can access some of the most stimulating content on the planet. There’s no delay, no person watching. It’s designed to very quickly get to a point where you’re not in full control.”

If the activists have their way, there will be someone watching. Someone who thinks he knows better than you how to live your life. Nearly every “expert” quoted or referenced in this article could do well by grabbing their dictionary and flipping to the “C”s — notably, correlationÃ‚Â and causation. Then, for homework, they can try to figure out the difference between the two and discuss how they may or may not be related.

So come on; we’re talking about pleasing pictures of sexy people. Like anything, if you overdo it you may have a problem — like sugar, alcohol, or episodes of Mama’s Family. But that doesn’t mean that every Sports Illustrated Swimsuit Edition is another sign of the impending doom of society any more than it would mean Carol Burnett is the antichrist. Wait, maybe that’s not the best example…